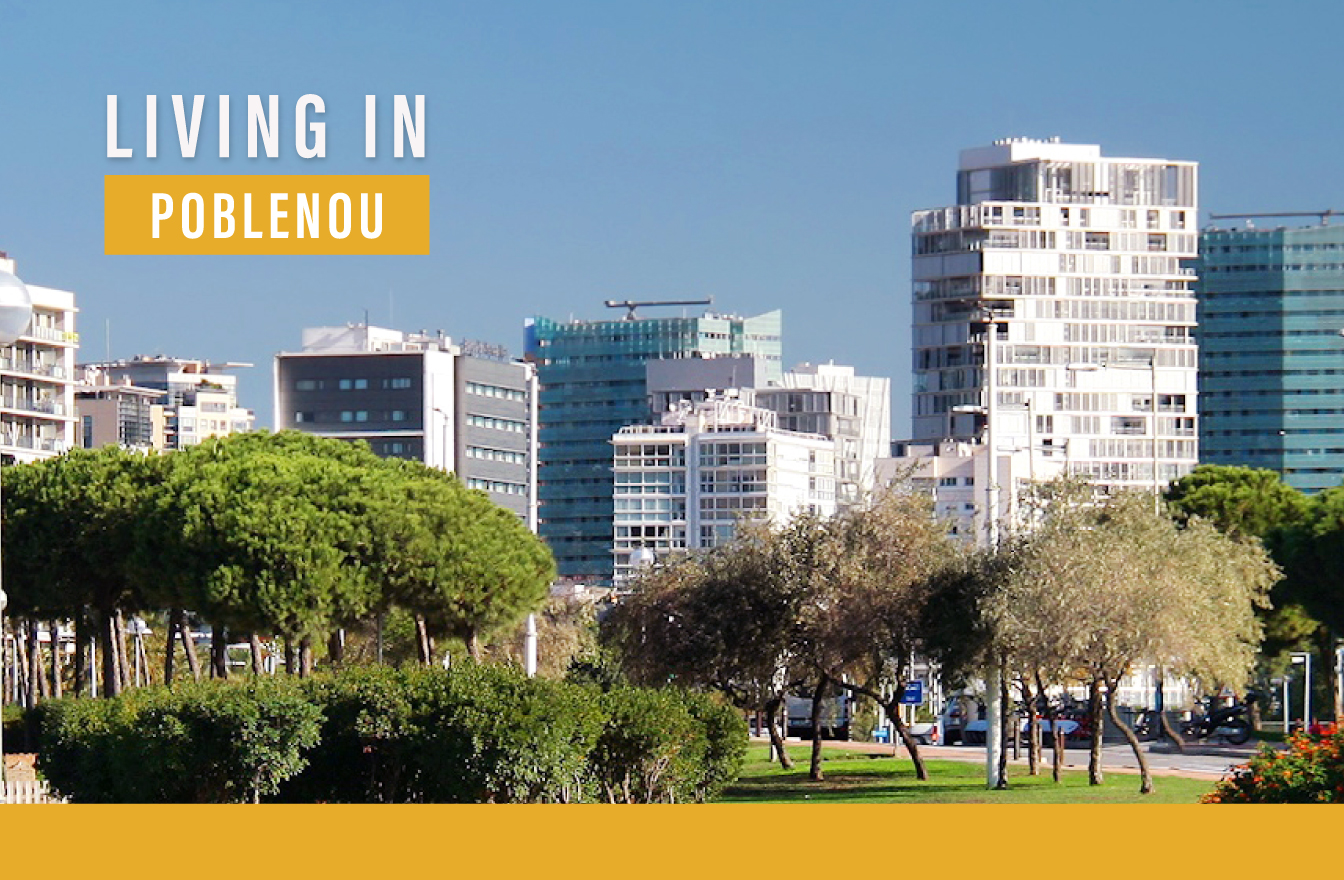 Living in Poblenou offers something you can’t find in any other of Barcelona’s 10 districts.

Neither is it living among craft beer breweries, pop-up markets and industrial-warehouses-turned-hip-art-galleries that can only compare with neighbourhoods far outside Spain – think Shoreditch in London, New York’s Meatpacking district and Berlin.

Nor is it being a max 20-minute walk to paddle boarding classes at the Platja del Bogatell.

No, living in Poblenou is more than all these luxuries.

Poblenou – literally ‘new town’ in Catalan – is about living in what Spain’s El País newspaper called the ‘first Catalan laboratory’ of urban renewal.

A very conscious transformation began in Poblenou in the 1990s after the former 19th century industrial powerhouse of all Spain went through a slow collapse due to crumbling businesses, a falling population and urban decay.

First came the 1992 olympic games and the creation of La Vila Olímpica del Poblenou. Then came the creation of 4 million m2 of office space which was termed 22@ and turned Barcelona into a leading city for startups in Europe and attracted the world’s top tech companies including the cream of Silicon Valley.

Now Poblenou is regarded as a leading example for cities looking to bring new life, new business and new residents back to urban wastelands.

This is what it means to be living in Poblenou – to be shaping the future of city living.

As a leading real estate agency in Barcelona, we love to understand neighbourhoods through their buildings.

You can’t talk about Poblenou without mentioning how the huge brick factories – some in desperate need of repair – speak of Poblenou’s industrial past. During the 19th century, manufacturing tycoons and a labourforce of job-seeking southern Andalucians created the forefront of Spain’s industrial revolution in Poblenou, mass-producing oils, wines, textiles, metals and machinery.

Living in Poblenou is nothing like the grand terraced and tree-lined streets many have as a vision of Barcelona.

It’s a Little rough around the edges – there is graffiti on the walls (or street art, depending on how you look at it). But Poblenou is also home to some of the most exciting buildings in the city if you’re in the world of international business, a music lover, or enjoy browsing trendy shops and street food at the Palo Alto market in a warehouse with DJs and live bands. It’s edgy and progressive. Cool and calm. Simply a fantastic place to live.

Below, we’ll cover a few of the top landmarks to know if you’re living in Poblenou:

It’s a mecca for swimmers, paddle boarders,  football or volleyball players on this popular blue flag beach in Poblenou. We may be in the largest city on the Mediterranean, but Barcelona also has clean beaches. 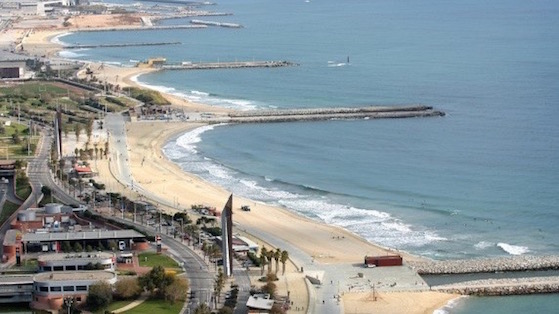 This iconic tower – built to resemble a geyser – marks the entrance to the 22@ tech neighbourhood, where the likes of Meta have a European hub.

This open-air music and event venue sits at the far north of the Front Marítim del Poblenou neighbourhood. This is where the Primavera Sound festival is held, among many others.

This shopping centre next door to the Parc del Forum is Barcelona’s largest, and right at the end of Barcelona’s famous Avinguda Diagonal. 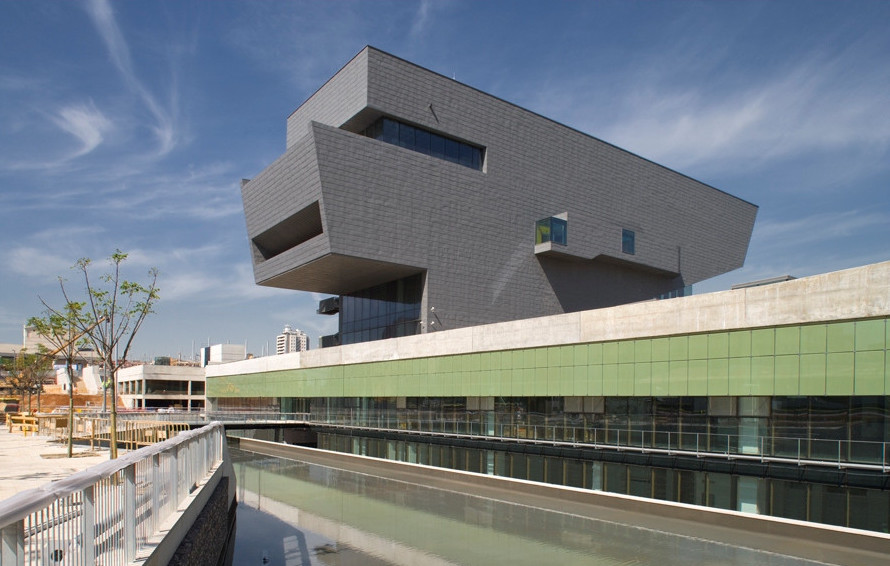 While much of Poblenou has an industrial feel, it’s also home to a traditional town with its own Art Nouveau buildings and its own Rambla – La Rambla del Poblenou. It’s a place typically busier than the rest of the neighbourhood, but with its own clutch of fine restaurants and bars.

Characteristics of the Poblenou neighbourhood

Now that we’ve covered the buildings, let’s dig into the character of Poblenou. Being a space for urban renewal, you can find many new build properties for sale in Poblenou.

If you’re in La Vila Olímpica del Poblenou or the Llacuna del Poblenou neighbourhood which houses the 22@ hub, you can find some stunning new apartments in Poblenou or those renovated with modern design breathed into old factories and warehouses.

A lot happens in Poblenou warehouses. Some hold events like the Independent Barcelona Coffee Festival where the city’s top baristas do amazing things with milk froth! You can even check out all the workshops, galleries, hotels and garage rooftops during the biannual Poblenou Open Day/Night.

Wandering Poblenou streets, they feel much emptier than other parts of tourist-trap Barcelona.

Aside from housing a creative and progressive subculture, Poblenou is also big business – the district was the destination of 86% of Barcelona’s many property investments in the first half of 2022, while the 22@ in particular has brought in €3.35 billion from 2015 to 2022 overwhelmingly from buyers’ of office space.

Finally, it’s worth noting that old Poblenou has a well-rooted community where people recognise each other and chatter in the streets.

All these are some of the characteristics you’ll find when living in Poblenou.

Poblenou is itself just one neighbourhood in the Sant Martí district – the most northern of Barcelona’s 10 districts and the one with the most beaches.

El Poblenou generally refers to just the old town, but there there are 5 neighbourhoods that carry its name:

This neighbourhood borders the Parc de la Ciutadella in Barcelona’s Ciutat Vella. The whole area was revamped to make way for the Olympic Games in 1992. It’s home to a sports port and wide maritime boulevard packed with bars and restaurants.

Here’s here you’ll find the 22@ district and the Torre Glòries and the Barcelona Design Museum. This district bears reference to what the Poblenou once was before the industrial revolution – a marshland with lagoons (or llacuna in Catalan).

El Poblenou itself houses the oldest residential part of the district. You’ll find a much different atmosphere here with the wide Rambla de Poblenou and a feeling more akin to other parts of Barcelona city.

Here’s where you’ll find the Museum of Natural Sciences, the Parc del Forum and the Diagonal Mar shopping centre. It’s one of the newest neighbourhoods in Barcelona and was only planned out in 2004 following a new urban planning project to celebrate the Forum Universal de las Culturas.

This neighbourhood houses some former factories and runs along the extension of the Avinguda Diagonal. It was only established as a separate neighbourhood to El Poblenou in 2006.

Conclusions on living in Poblenou

Each one of Barcelona’s 10 districts offers a different lifestyle – and each is attractive for different reasons.

Living in Poblenou puts you at the forefront of design, culture and international business. Poblenou does not look to the past as does the medieval Ciutat Vella and the 19th century apartments dotted with Gaudí masterpieces in Eixample.

Convinced to have a closer look?

You can see a list of our latest apartments for sale in Poblenou here.

Wonderful refurbished loft with a very large terrace in Poblenou

Impressive new-build luxury penthouse with terraces and pool in Eixample