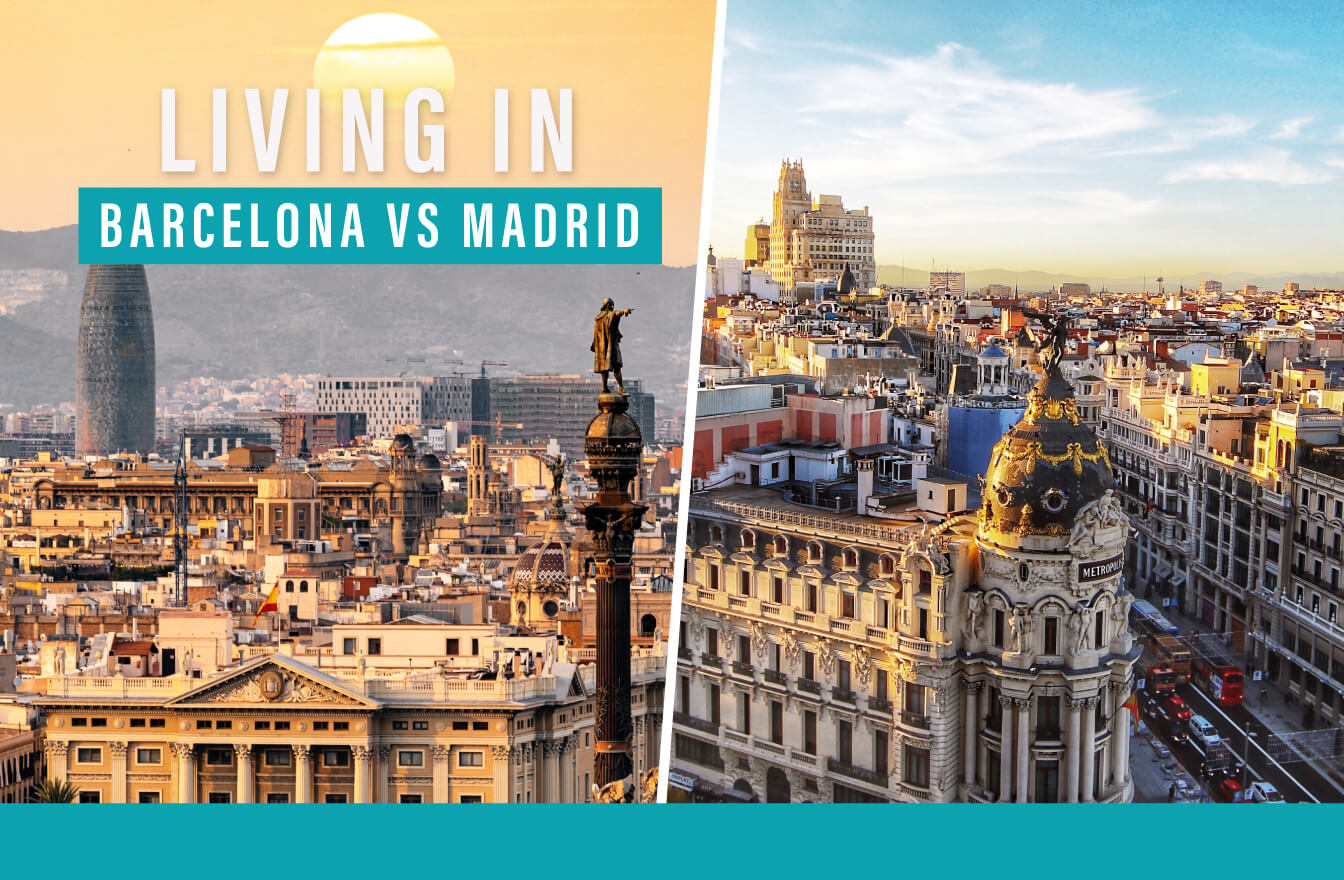 Are you thinking whether to live in Barcelona or Madrid? From our real estate agency in Barcelona, we are going to give you a few tips so that you can assess which is your best option. We are going to review point by point, all those characteristics that help us to decide where we would like to live according to the lifestyle we want.

After reading these comparisons, you should get a good feeling about whether living in Barcelona or Madrid is right for you.

Spain is a country where the capital is not always where it’s happening.

American readers will understand. But British readers might not have a reference point. Barcelona has higher property prices, receives more property investment and is home to the most visited place in Spain – Sagrada Familia with 4.5 million annual visits.

Although Real Madrid has 101 vs 97 wins over FC Barcelona in the Spanish clásico match, and is the world’s richest football team, Barcelona has the bigger stadium.

But what’s it like actually living in Barcelona vs Madrid?

Below, find key comparisons that will help you get the feel of Spain’s two largest cities.

Madrid has a bigger population than Barcelona: 3.2 million people vs 1.62 million. The wider Madrid metropolitan area is home to 6.79 million compared to Barcelona metro’s 5.47 million.

This makes navigating each city a different experience. Madrid is much more connected by a public transport system. But in Madrid a majority 29% use their car, while in Barcelona a majority 25% of people use the metro system to get around. Here is a list of luxury flats in Barcelona, so that you can see how prices move in the coastal city.

2. Where is it more expensive to live?

Madrid is overall a cheaper city to live in than Barcelona. You can buy a coffee for just €2 and eat out at a regular restaurant for €12 a head, according to Numbeo. You can use public transport for as little as €1.50 and your average monthly rent could be as little as €800 for one person or from €1,240 for a family.

Barcelona consumer prices are around 9% higher than Madrid, and restaurants and shopping trips will cost a few euros more. Barcelona rental prices are the highest in Spain according to Deloitte, averaging €21.30/m2 (i.e. you’re paying over €1,000 a month for a regular flat).

Here is an article where we talk more in depth about the cost of living in Barcelona.

Finally, we must also value the prices of owning a property, because…. are you interested in how to find a flat in Barcelona? Property prices are also higher on average in Barcelona at versus €4,093/m2  versus in €3,974/m2 Madrid. Obviously, all of this will depend on whether we are looking for a property in the upper area of Barcelona or in a more modest area.

3. Which city pays a better wage?

Madrid tends to pay its people better. The average monthly wage in the community of Madrid is €2,149 compared to €2,132 in Barcelona. The best-paid municipality in Spain is Pozuelo de Alarcón – home to famous football players and celebrities in gated compounds – where the average disposable household income is €57,956.

Barcelona has its richest neighbourhood in Sant Cugat del Vallès, in the hills behind Barcelona city, with an average disposable household income of €41,190. But Barcelona generally doesn’t have wealthy enclaves like Madrid – districts are more diverse and there are far fewer people living in poverty.

The wage you could earn while living in Barcelona or Madrid depends a lot on your work. Barcelona has the booming tech neighbourhood 22@ with employers like Meta and Amazon, and which has helped Barcelona rank as the 4th top European city for startup financing. Madrid is a top diplomatic hub, it’s a centre for education and has a thriving business culture too.

4. Which city is most beautiful?

Madrid’s residents can access green areas within a 15-minute walk from any point in the centre. Madrid has the fantastic Retiro Park, a UNESCO site with rose gardens and fountains and surrounded by neo-classical monuments. ‘El Retiro’ is the most visited location in Madrid.

Barcelona wins hands down on architecture, thanks to the art nouveau influence of Antoni Gaudí. Sagrada Familia is Spain’s most visited site and his other works are not far behind. But Barcelona is more than Gaudi. In 1860 the central Eixample district was built in a grid pattern, designed so every apartment resident could access sun and calm in an interior patio.

You could easily get lost in the beauty of either Barcelona or Madrid for days. The question also depends whether you enjoy walks by the sea or walks in the mountains. 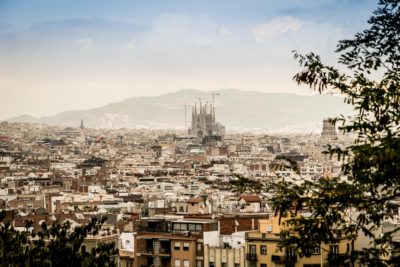 Madrid is mountain country, and its best-known dish is the cocido madrileño which is a rich broth served with boiled meats and vegetables. Local families will fight to book out the best wood-fired grill houses. But Madrid is also a modern metropolitan city where excellent foods and fusion from around the world can be found.

Barcelona has more Michelin starred restaurants than Madrid, with 26 vs 22. While Barcelona is most associated with fine food and cuisine its best known dish is probably the pa amb tomàquet – a simple bread and grated tomato which is practically a national breakfast. Barcelona’s traditional fish stews, sourdough flatbreads, roasted vegetables and desserts are too many to name and can be easily found alongside international eateries.

You’ll be able to find all kinds of vegan, vegetarian, organic and specialty foods in Madrid and Barcelona. But the question of the best food also about food culture, which in Spain is found in the bars. Spain is the country with the most bars per person in Europe – one bar for every 132 people. There are more bars than hospital beds.

Madrid is inevitably the place where the most famous acts and musicians go first when in Spain. Madrid has 84 theatres compared to Barcelona’s 56. Madrid is also home to the most famous Spanish paintings, like Picasso’s Guernica at the Reina de Sofia and Velazquez’s Las Meninas en El Prado. It’s also where all attention turns during events like New Year’s Eve, The Three Kings celebrations and events like Gay Pride.

Barcelona might not be the centre of the nation, but it has more museums than Madrid (104 vs 89) more art galleries (181 vs 168) and has three opera houses and 139 libraries. An analysis by Conde Nast Traveler found Barcelona had a higher ‘cultural quality’ score than Madrid and with more cultural spaces per inhabitant.

Madrid is the highest-altitude capital city in the European Union – 657m above sea level. Snowfall from January to April is common in Madrid and temperatures can fall to as low as -10°C. But that doesn’t mean Madrid is colder year-round. Madrid swelters in the summer and can reach over 40°C (104°F) which pushes most inhabitants to drive the four-hour trip to the Mediterranean coast to the east and south or the Atlantic coast to the north.

Barcelona, meanwhile, is the largest city on the Mediterranean Sea. It rarely snows in Barcelona and when a hot day comes it’s a short drive or train ride to some of Spain’s most beautiful beaches – like Playa El Morer in Sant Pol de Mar to the north or the Sitges beaches to the south. The average humidity in Barcelona is 72% and higher than Madrid (57%).

While you’ll find an easier climate in Barcelona, Madrid has its benefits. The wider Madrid region is the EU area with the highest average life expectancy at birth – 82.2 for men and 87.8 for women. Must be that fresh mountain air? 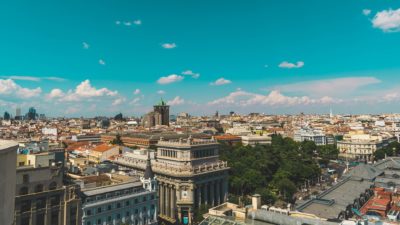 Madrid is a less touristic city than Barcelona, which is the reason why street robberies are lower in the capital. Overall crime is low in Spain in comparison to other European countries. Street thefts are the biggest problem because anything worth under €400 is not considered a crime, just a misdemeanor.

Barcelona might suffer from more street thefts than Madrid, but it’s far from a dangerous city. While New York saw 458 murders in 2021 Barcelona saw 7. Burglaries can be a problem for luxury homeowners, requiring alarm systems, but as more than 66% of residents live in apartments it’s not an issue for many people.

Spain has one of the lowest homicide rates in the world – 0.6 per 100,000 compared to 6 per 100,000 in the USA. You cannot possess firearms without proper licences and checks, like to be a hunter. Only people who work in businesses considered ‘at risk’ – like a jeweller’s – can apply to carry a firearm for self-defense.

Madrid is home to the famous La Gran Vía, often called the Spanish Broadway or the ‘street that never sleeps’. Further north is the Calle Serrano, with international fashion brands, jewelers, watch shops and luxury goods.

Barcelona has its own famous street – La Rambla – but the best shopping areas are on streets like Passeig de Gràcia with luxury international brands.

Both Madrid and Barcelona have the finest shops money can buy, and there will always be a Corte Inglés department store nearby. Many times it’s the traditional markets with local produce where you can find the most unique shopping experiences. In Barcelona the most famous is Mercat de la Boqueria and in Madrid it’s the Mercado San Miguel.

10. Where’s the best for schooling/ studying?

Madrid has the highest number of top-ranking schools on the Forbes 100 best schools in Spain list. The best rated is the British Council School, but there are also schools offering an American education and tuition in French or German. Madrid has the higher ranking universities, with institutions like the Universidad Pontificia de Comillas where presidents of Spain’s biggest companies studied.

Barcelona has the top rated school in Spain according to Forbes, the bilingual and international St Peter’s School. There’s a wide range of international schools too offering American High School diplomas and tuition in foreign languages.

11. What are stereotypes of people from Barcelona vs Madrid?

Madrid is known as a much more friendly place than Barcelona. The Madrid personality is said to be expressive and talkative, with a direct no-nonsense attitude that many can mistake for aggressiveness. People in Madrid also stay up really late – Ernest Hemingway famously wrote ‘your friends will be a little uncomfortable’ about you going to bed early in Madrid, and that appointments are ‘habitually made for after midnight at the cafe’.

Barcelona is well known for being educated, business savvy and cultured – this was the city that led Spain’s industrial revolution, has been at the forefront of global art and design, and keeps Spain on the map in so many ways. Barcelona can present a challenge because locals speak Catalan more than Castilian Spanish, but once you’ve scratched the surface you’ll find the people as warm and family-first as you would expect anywhere in Spain.