The current pandemic has had an unprecedented effect on businesses worldwide and the property market has not escaped unscathed. Barcelona now waits for the return of international buyers, that will play a key part in the recovery of the property market.
The number of property sales transactions carried out inevitably decreased in 2020 compared to the previous year as a result of the Covid-19 pandemic, which not only prevented potential buyers from viewing properties in person but also meant that many potential international buyers were unable to travel outside their home country in search of their new home.

According to the Spanish Land Registry the number of property sales in Barcelona Province in 2020 decreased by 20% compared to 2019. However, the province of Barcelona was second only to Madrid in terms of property transactions, showing that although the Spanish property market in general has been affected hugely by the current pandemic the province of Barcelona remains one of the most popular regions in which to buy property. This was confirmed further in the last quarter of the year when the number of sales in Barcelona Province registered with the Spanish Land Registry was up 14% on the number in the previous quarter, proving that confidence was already returning to market despite the continued lack of face-to-face property viewings and the ongoing travel restrictions. This trend has continued into 2021 with the number of sales within Barcelona Province in the first quarter of 2021 increasing by 21.2% compared to the fourth quarter of 2020.

The return of international buyers

As international travel starts to reopen the road to recovery is only expected to continue, with industry experts predicting that international buyers will play a key part in the recovery of the property market. Enforced periods at home have given many the unusual opportunity to reevaluate their lives and for many that has meant deciding to put into action their long-term plans, be it purchasing their dream holiday home or biting the bullet and relocating to another country. Although real estate agents have managed to adapt to a new way of showing their properties by using innovative techniques, with virtual viewings now a necessity rather than an additional marketing tool, the return of face-to-face viewings will undoubtably be an important factor in the rise of property sales.

The international market has long been an important one for the Spanish property market, with foreign buyers representing 12.45% across Spain as a whole in 2019 and a similar proportion of property buyers in the autonomous region of Catalonia coming from overseas. Although 2020 brought with it a decrease in the number of property buyers, surprisingly the proportion of foreign buyers within Barcelona Province hasn’t dropped significantly with the share of international buyers in the first quarter of 2021 falling by just over 1% to 8.34% since the last quarter of 2019, when foreign buyers represented 9.45% of all property sales. 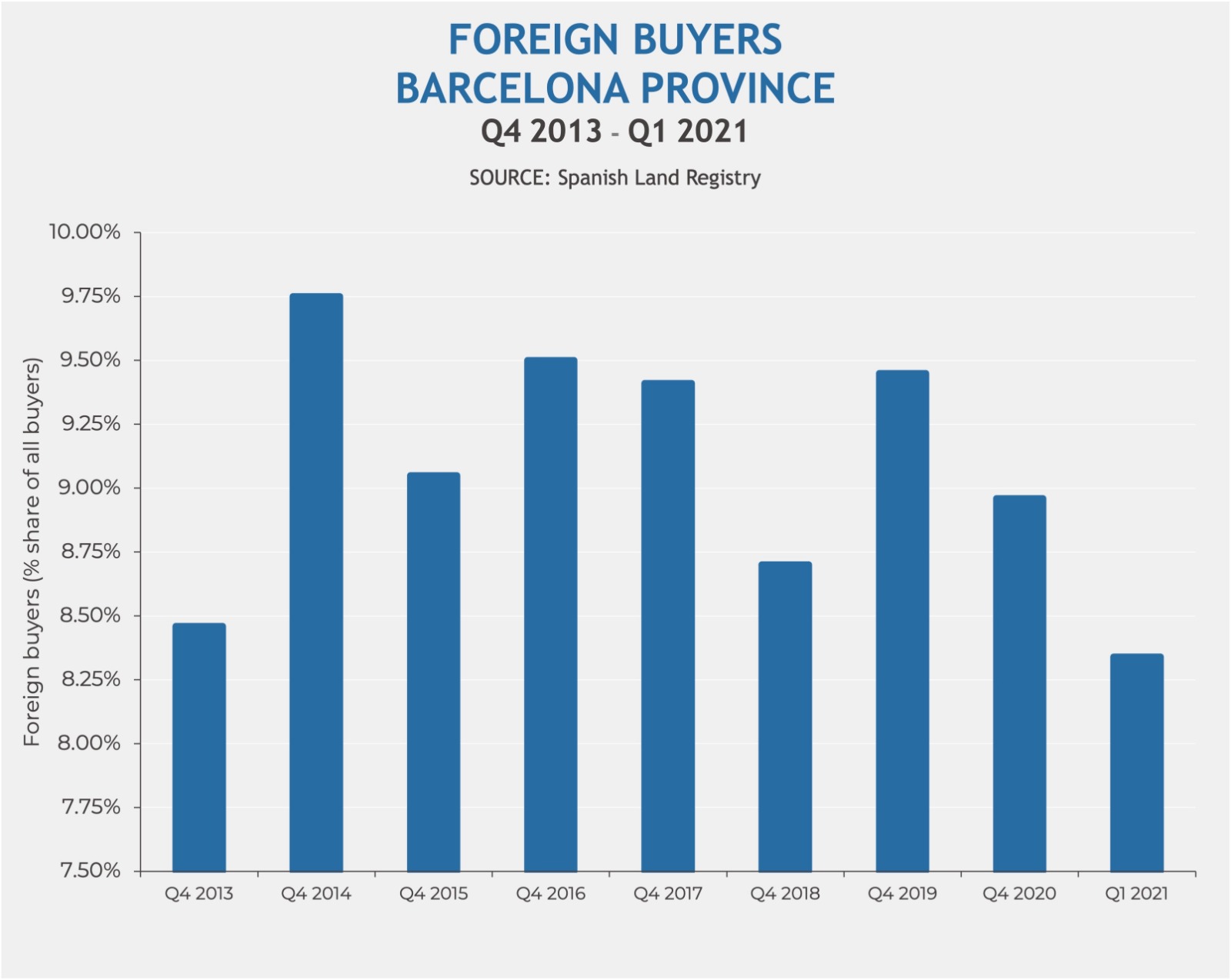 As foreign buyers return, their requirements for second homes are beginning to change.

“A home with outside space is almost always top of the list for foreign buyers. They are looking for a balcony, a terrace, a patio or a small garden. They are also looking for homes that have an area which could easily convert into a home office, such as an alcove in the kitchen or a spare room. Increasing numbers of international buyers are using second homes in which to base themselves for longer periods and work at the same time,” comments Francisco Nathurmal, CEO of Bcn Advisors.

The areas most popular with international buyers include the highly sought-after Eixample district as well as the desirable Turó Park neighbourhood, situated in the district of Sarrià-Sant Gervasi. The latest figures published by the Generalitat de Catalunya show that whilst the number of sales in the first quarter of 2021 in some of the city’s districts has decreased compared to the first quarter of 2020, the number of sales in the district of Eixample has increased by over 50% and the number in Sarrià-Sant Gervasi has remained steady, suggesting again that foreign buyers are returning.

Tourists are also beginning to return with the Spanish National Institute of Statistics reporting that over 94,000 tourists visited Catalonia in April this year, up 9% on the number of visitors in March. As of 24 May, visitors to Spain from outside the European Union can enter the country without having to present a PCR test. This is good news for Brits looking to buy property in Spain, although until the UK place Spain on the “green list” those returning to the UK from Spain will have to take two tests on their return home as well as quarantine for ten days. As of 7 June, all visitors from around the world who have the full protection given by a Covid-19 vaccination will also be able to visit without any restrictions.

Industry insiders are hopeful that the opening of borders and therefore the return of the international buyer together with the current attractive property prices and low interest rates will combine to aid the property sector’s recovery and ensure its return to pre-Covid-19 levels as soon as possible.

“Property prices have had to undergo a significant adjustment due to the drop in demand and so it is the perfect time to take advantage of both low property prices and favourable mortgage rates,” concludes Nathurmal.

Fabulous refurbished penthouse with 2 terraces and wonderful views in Eixample