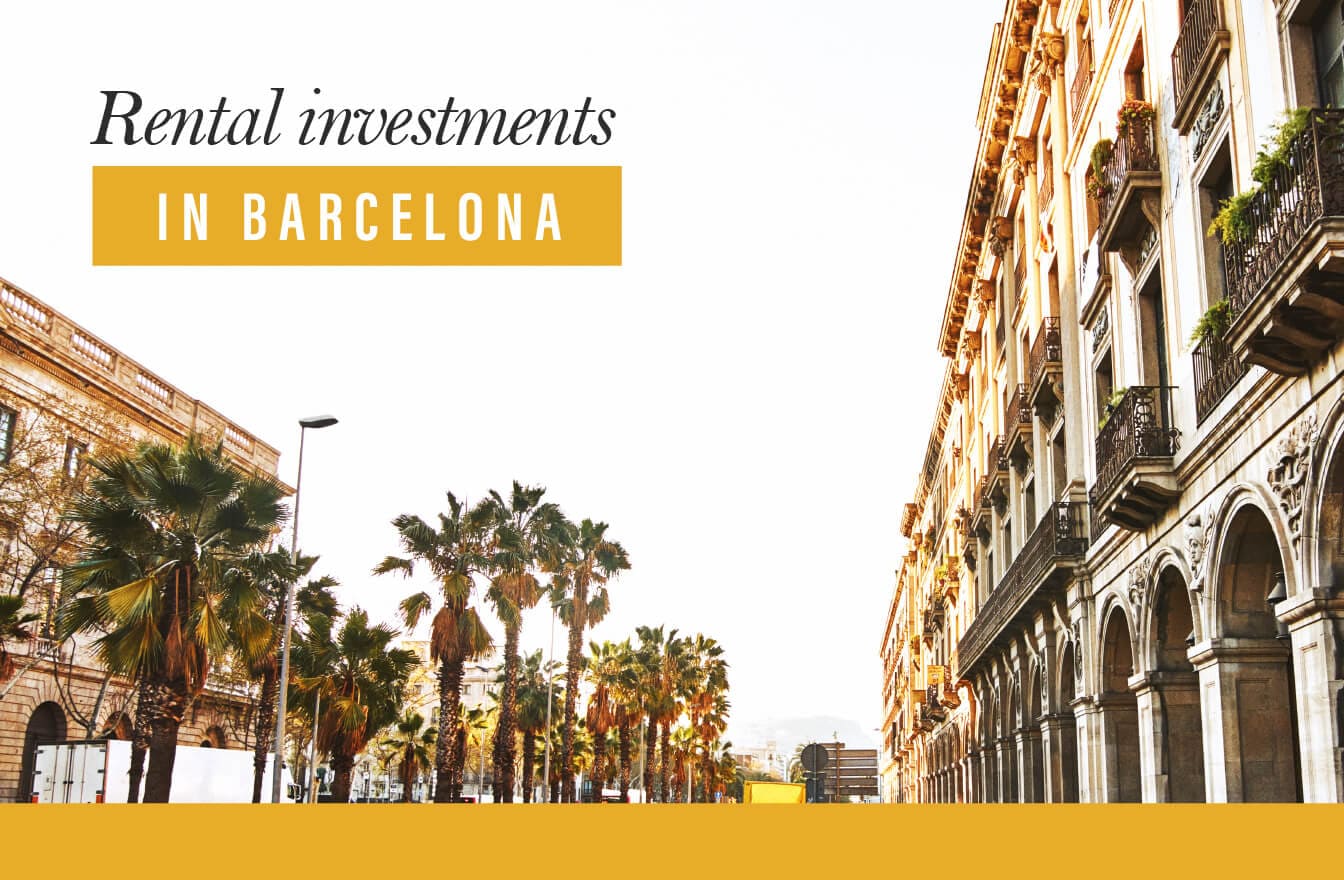 October was a challenging month for Barcelona as the city witnessed a number of demonstrations following the jailing of nine Catalan separatist leaders. Inevitably there has followed much debate over how this may affect the city’s housing market. Industry experts are fairly unanimous that the clashes seen worldwide will have an impact on property sales at least in the short-term, but almost all would also agree that Barcelona is sufficiently robust and appealing to continue to attract investors in the long-term.

The reasons people buy or rent in Barcelona are multifaceted. Many choose to purchase or rent homes in the city due to lifestyle reasons – the Catalan capital has a quality of life arguably unrivalled elsewhere in the world. The Golden Visa programme, which offers Spanish Residency in exchange for property purchases, is becoming increasingly popular among non-EU citizens; growing numbers of students are choosing Barcelona as a base, particularly for its reputable business and design schools; Barcelona’s reputation as a FinTech hub has attracted companies such as Facebook and Amazon to the city and along with it, a pool of international talent who all need to rent or buy homes; and then, of course, there are the property investors, a growing demographic who will have seen excellent capital growth on their purchases since the start of the property turnaround midway through 2014 – property portal Idealista shows that prices in Barcelona city have risen almost 40% in the past 5 years.

During the last 12 months however, Barcelona has begun to see some property price adjustments. In the year to September 2019, prices decreased by 1.7%, following 5 years of rapid growth (from June 2016 to June 2017, prices soared by 22% in the city, according to idealista). Centrally located districts Gràcia and Eixample have registered the biggest price drops, of 3.4% and 2.8% respectively.

What does this mean for investors?

As with all property markets, Barcelona has slower periods but, thanks to many of the reasons outlined above, once prices have readjusted, most forecasters predict further price growth at a steadier pace. Many believe that investors should take advantage of the slump in prices to purchase a property at a competitive price.

Investors should also look at Barcelona’s rental market, which, in contrast to the sales market, has seen price increases in the past year. According to idealista, average prices across the city as a whole have gone up by 2.5% in the year to September 2019. Up-and-coming districts such as Sant Martí, Nou Barris and Horta-Guinardó have seen particularly significant growth, registering 6.3%, 5.8% and 4.3% respectively.

Other portals suggest even sharper prices increases when it comes to rentals. A recent survey by HousingAnywhere shows that Barcelona has seen the steepest rises in rental prices for furnished apartments out of any other major European city, rising by 8.6% in the year to Q3 2019. Barcelona is followed by Berlin, which has seen rents rising by 7.4% and then Brussels where rents are up by 5.4%. 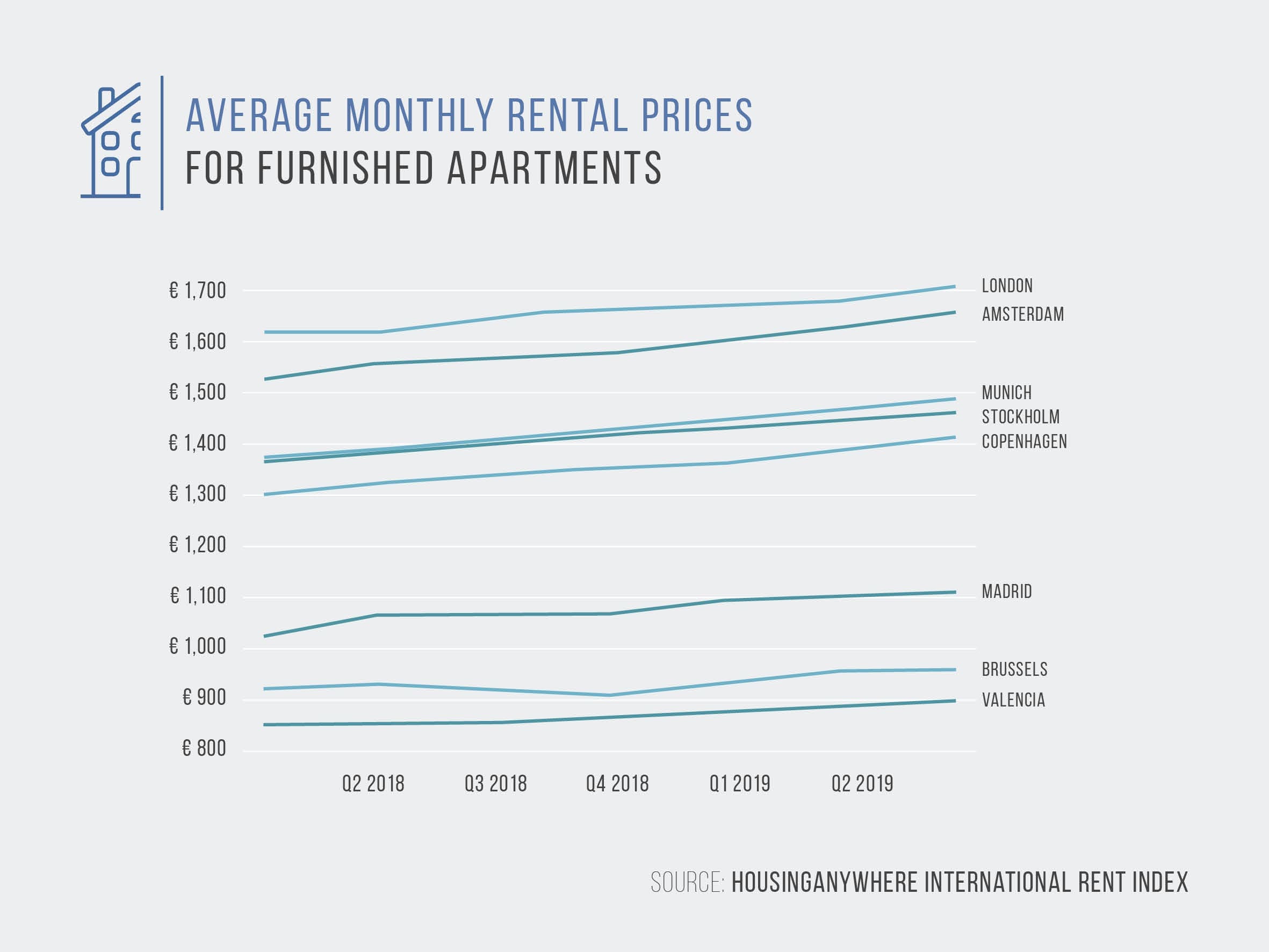 Overall London still has the highest rents for furnished apartments out of all European cities averaging at €1,730 per month, followed by Amsterdam (€1,675 per month) and then Munich (€1,507 per month). Rents in Barcelona averaged at €1,243/month in Q3 2019 according to the portal, approximately midway in the list of average monthly rents for major European cities.

Rental yields in Barcelona can be over 5% for new or renovated homes in centrally located districts, areas where investors can no longer count on short-term rents due to the restrictions on tourist licences. According to recent data released by Deloitte, Barcelona ranks fourth in the list of European cities with the highest rental yields (averaging at 4.3%), behind Madrid (5%), Rome (4.8%) and Amsterdam (4.4%).

Investors who want to be able to use their properties when they are visiting Barcelona tend to prefer short-term or mid-term rentals (between 6 months and a year). Renting out mid-term is still possible in the city’s prime districts but for short-term rentals investors need to search hard for the few properties for sale that can be bought with a rental licence, although the price will be at a premium.

In conclusion, investing in property in Barcelona is still a very viable option both with regards to capital appreciation and rental income, but as always it is advisable that investors do their homework to maximise returns

Protected: Penthouse to be refurbished with a fabulous 123 sqm terrace in Eixample