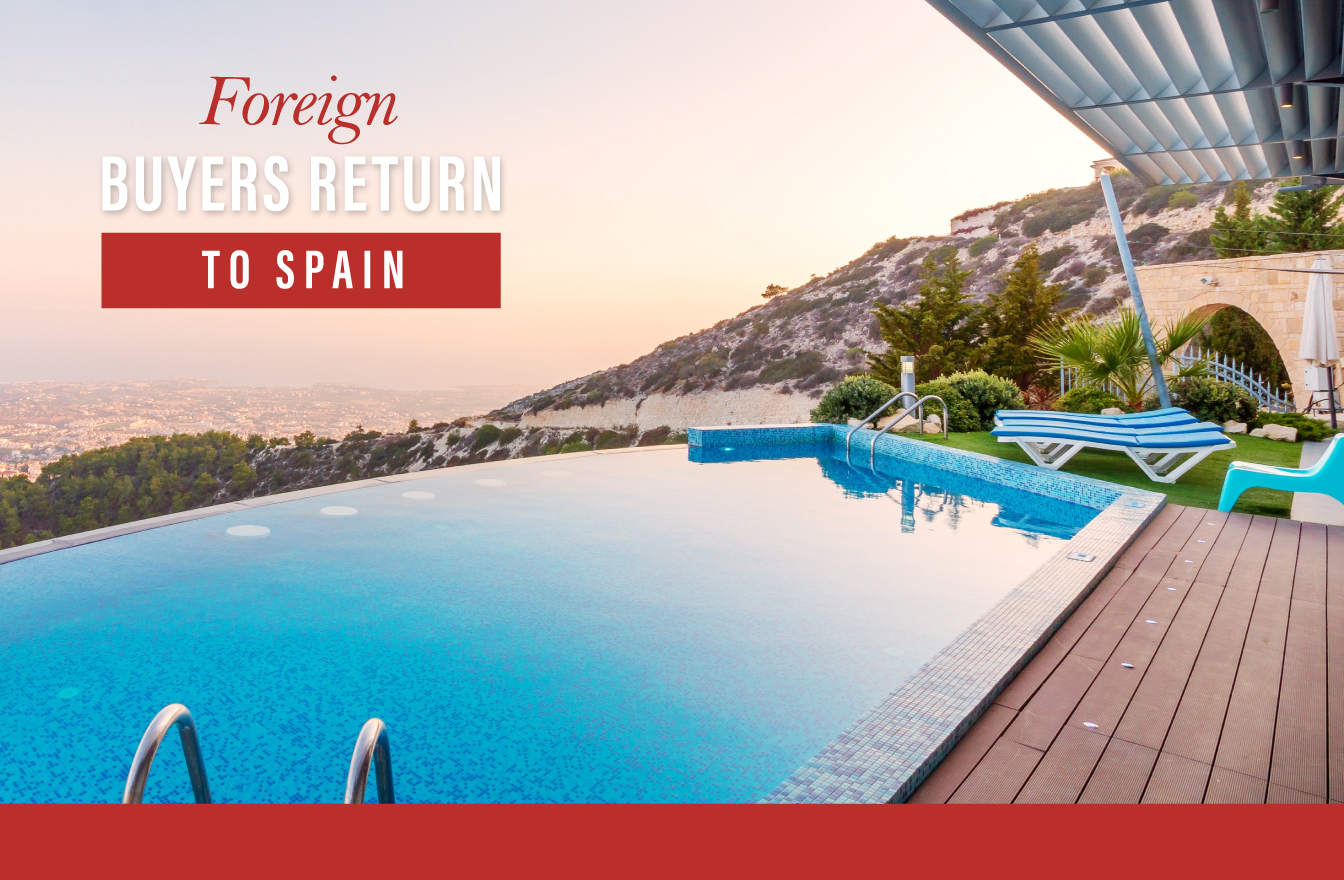 The prediction that with the lifting of travel restrictions both the tourists and the foreign property buyers in Spain would begin to return appears to be coming true, bringing with it good news for both the Spanish economy and the property sector.

Although it may take some time for the numbers of property buyers to reach pre-Covid-19 levels, encouraging signs are emerging from the latest statistics published at the end of the second quarter of 2021. This is backed up by the latest tourism figures, confirming that people are starting to travel again and therefore ready to start that long dreamed about property search overseas.

The return of the tourists

Since June this year all visitors from around the world who have been fully vaccinated with two doses of the Covid-19 vaccination have been able to enter Spain without any restrictions. This has of course had a large impact on the number of tourists visiting the country, and in particular the region of Catalonia.

The number of visitors has by no means returned to that of pre-pandemic days, but the tourists are certainly returning, with the Spanish National Institute of Statistics (INE) reporting that almost double the number of tourists visited the region of Catalonia in July this year compared to the previous month. When compared to July last year the numbers have increased by 86.4%.

Foreign buyers on the up

This is despite the fact that the proportion of British buyers fell by 2.62 percentage points to 9.49% in the second quarter of the year compared to the previous quarter, due in part to both the effects of Brexit as well as the Covid-19 pandemic. The British, however, continued to make up the largest proportion of foreign buyers in the second quarter of the year, closely followed by the Germans (9.04%) and then the Moroccans (8.32%), the French (7%) and the Romanians (6.14%).

Do you have a property in Barcelona? We help you to sell your flat or house in Barcelona in the most efficient way:
Sell my apartment in Barcelona with Bcn Advisors

In the region of Catalonia, the proportion of property buyers from overseas increased by 0.03 percentage points in the second quarter of 2021 when compared to the first quarter, with 10.21% of all property transactions in Catalonia between April and June being made by buyers from overseas. Of the 17 autonomous communities in Spain, Catalonia is sixth in terms of the proportion of foreign buyers, ahead of other communities such as: 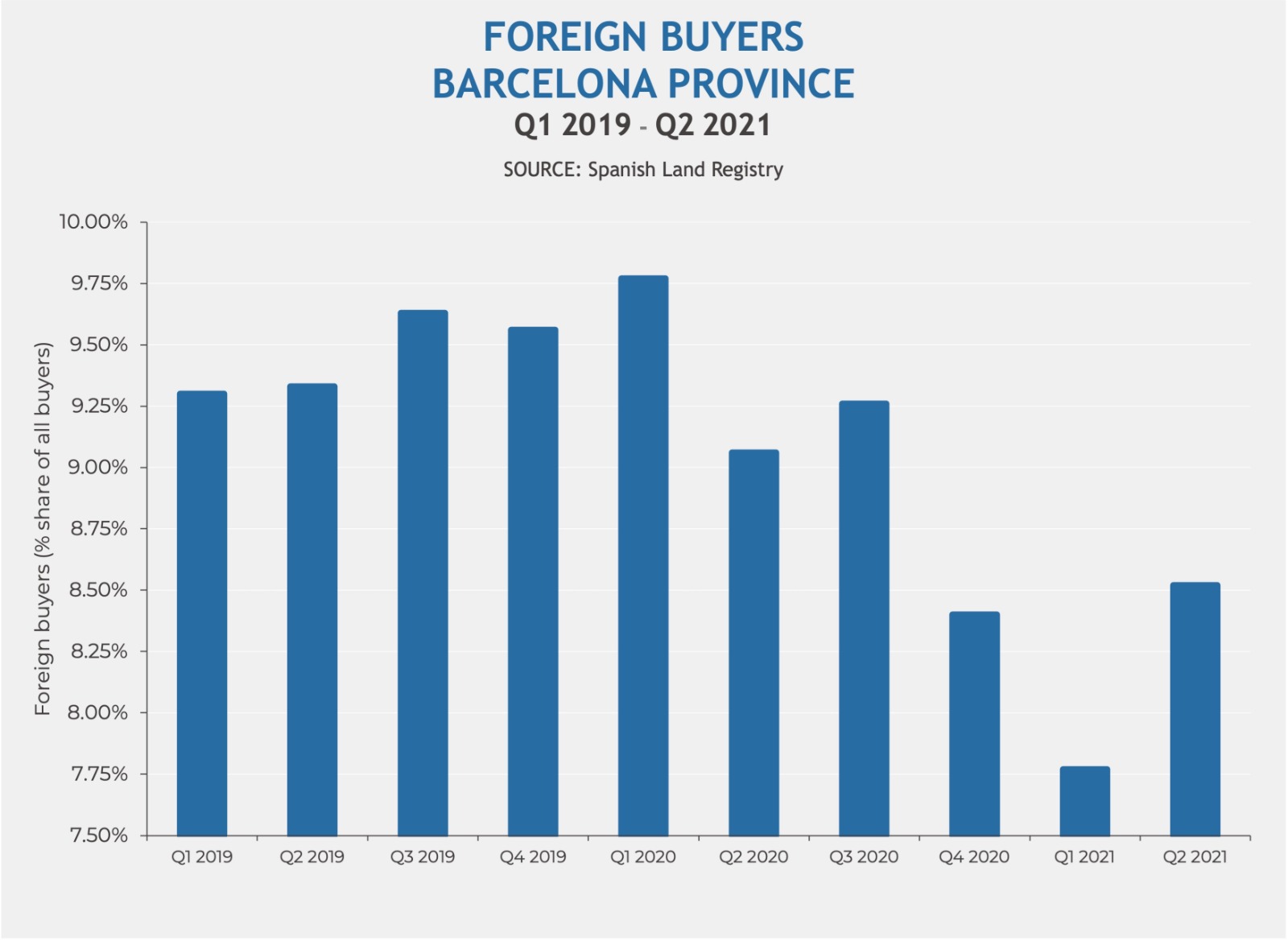 Whilst some foreigners, largely those with modest incomes, are unfortunately being hit by the banks tightening their criteria when it comes to mortgage applications, the continued low interest rates remain an extremely attractive proposition for foreigners who are eligible to apply for a Spanish mortgage. The Euribor, the rate used by Spanish banks to calculate their mortgage rates, is at an historic all time low and experts predict it is likely to remain below zero for some years to come.

Property prices across the city of Barcelona remain relatively stable. The latest report from the Spanish Land Registry recorded an average property price of €4,165 per square metre across the city as a whole, an annual increase of 1.4%, suggesting that there is plenty of potential for investment opportunities.

“Now that the strictest travel restrictions are being lifted we are already seeing foreign property buyers returning to Barcelona and are hopeful that this will continue. In particular, we have registered considerable interest from US and French citizens. The relatively stable property prices combined with low interest rates continue to make it an ideal time to invest in Barcelona property,” comments Francisco Nathurmal, CEO of Bcn Advisors.

Outstanding and exclusive luxury property with garden and backyard in uptown