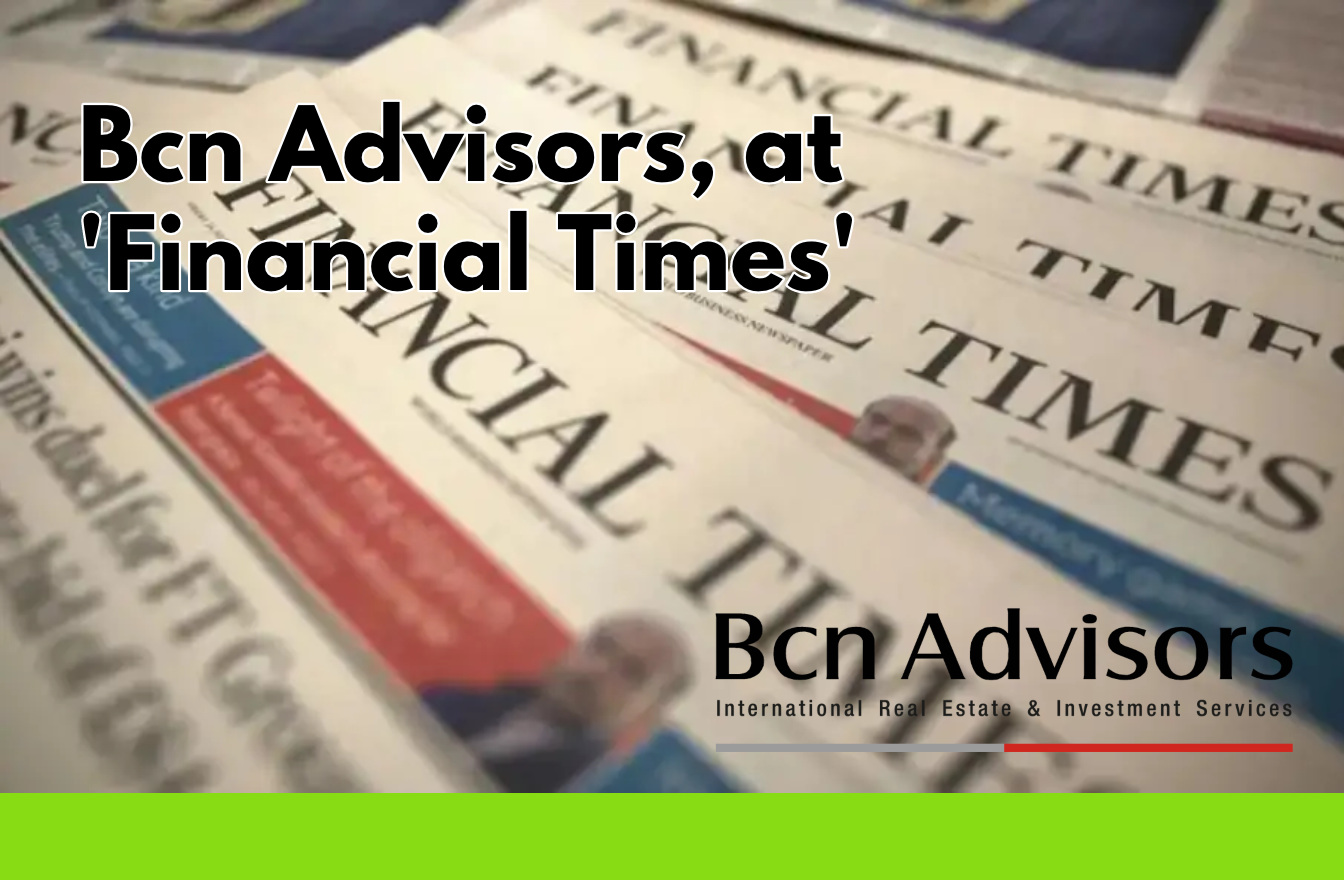 Francisco Nathurmal, founder and CEO of Bcn Advisors, is featured in an article in the prestigious ‘Financial Times’ newspaper on the luxury real estate market in Barcelona. In conversation with journalist Ian Mount, Nathurmal states that demand outstrips offer in this sector, thanks to the attractiveness of Barcelona and the end of restrictions on travel due to the Covid, but recognises that legislation is holding back the development of new projects.
In an article published by the Financial Times under the title “Barcelona limbo: local rules to keep property affordable put development on hold”, one of the world’s leading business newspapers analyses why luxury housing in the city is experiencing a fast rise in prices. There are several reasons: the lack of supply of super-luxury €2m-€3m apartments, the recovery of international demand after the restrictions caused by Covid and some of the measures introduced by the city council.

According to the article, the luxury real estate market in Barcelona has reawakened after the toughest stages of Covid, but stock is low compared to demand from wealthy buyers, who are looking to enjoy the quality of life in Barcelona.

“Since people started travelling in April, May, we have had record amounts of sales. It’s gone crazy” says Francisco Nathurmal. “Now the problem is that we don’t have the stock of properties that we need, especially in properties around 2 to 3 million euros.”

The article explains that this limitation is not only due to a post-pandemic market in which supply and demand have not yet returned to equilibrium, but also to a series of measures taken by the city council to make the property market more affordable for local buyers, with the intention of combating the effects of tourism. “These measures, on the other hand, may have stunted overall development”, argues journalist Ian Mount.

As the article comments, Barcelona’s fraught relationship with hotels and luxury real estate, often geared towards foreign clients, came to the fore after the financial crisis of 2007-08, when plummeting prices led to a flood of foreign tourists and buyers and put many of the city’s residents out of business.

For his part, Francisco Nathurmal says that before the arrival of Ada Colau as Barcelona’s city councillor and the independence referendum of October 2017, “we were seeing prices rising so fast that I was happy, but at the same time I questioned that it didn’t make much sense for that to happen because, if that situation continued, even high-end locals won’t be able to live here”. However, “luckily it slowed down and the local market can still live in the city”.

Interested in selling your luxury property? Visit our website to find out all the information you need:
We sell your flat now in Barcelona

In addition to the hotel moratorium, Ada Colau’s government also passed a regulation at the end of 2018 to require all new constructions of more than 600 square metres to reserve 30% of their units for social housing.

According to data from the article, the number of applications for the construction of flats over 600 sqm fell from 234 in the two months before this regulation was passed, as developers sought to obtain licences before the new measure came into force, to 64 in the seven months that followed.

“This underlines why Barcelona has been paralysed from the point of view of new construction. If all the projects that have been stopped had been carried out, Barcelona would have become an incredible city with high-end clients,” says Francisco Nathurmal.

The article presents the case of Alfons Hidalgo, a buyer represented by Bcn Advisors who has acquired a duplex penthouse in Dreta del Eixample with a value of around 2 million euros, after 6 months of searching. In his opinion, “Barcelona is special because I was born here, but it is in danger of falling behind. Bigger cities have declined in the past and I refuse to accept that this is happening in my city”.

Despite all this, the article concludes that Barcelona’s luxury real estate market is dynamic and, in fact, the number of sales of homes over one million euros went from 233 in 2020 to 146 in the first half of 2021.

Beautiful refurbished apartment with original features in a modernist building