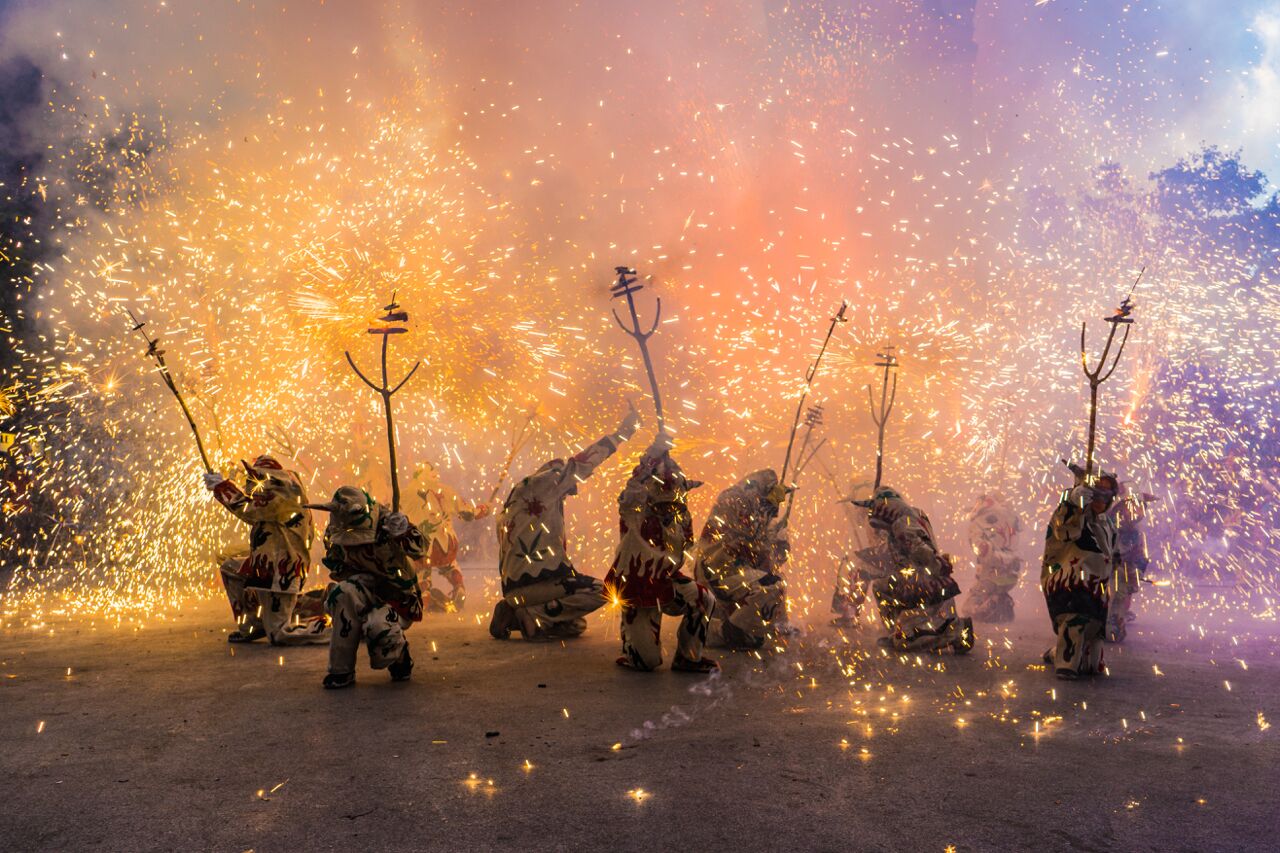 Take a break from Barcelona and dive into the compact, trendy streets of this proud, historic and happening ‘village in the city’.

Just above Avinguda Diagonal, the careful order of Barcelona’s wide open gridded city blocks give way to a more intimate and unique urban landscape. Signposted by the glitzy Passeig de Gràcia, the urban enclave of Gràcia itself couldn’t be more different.

This is not a place for Prada, Gucci or Starbucks. Gràcia is all about keeping it local and independent, with tiny bars and cafes entertaining trendy clientele into the small hours, and narrow streets connecting squares that offer scenic open spaces in which to take a tasty break in your meandering explorations.

These places are tree-lined oases of outside tables and benches where locals and tourists chatter over coffee and Vermouth, noisy kids kick a football against a clock tower and musicians of various abilities busk for a few loose Euros. Each square has its own identity and history, and while the more popular have plenty to offer, it pays to investigate off the beaten track, where surprises await.

It’s easy to trace the outline of Gràcia on the map. This fiercely proud neighbourhood dates back to 1628 and was an independent town until the late 19th Century. Since then it may have been absorbed into the larger urban sprawl of Barcelona, but Gràcia retains a strong identity, bolstered by a high number of residents who have been here all their lives and a packed calendar of very local events.

The biggest of these is the Festa Major which takes place in the broiling heat of mid-August and sees an annual battle to create the best-dressed street in Gràcia and lay on the best party. Bunting and banners are just the start of it, with the most competitive participants spending weeks building elaborate models and other colourful creations, many in papier mache that will slowly wilt or suffer damage at the hands of overindulgent revellers.

It’s all good fun though, just as all the Gràcia festivals are – and rarely a month goes by without the rhythmic morning alarm of giant bangers ushering in another day of celebration. This may see giants parading through the streets, teenagers bashing drums and blowing whistles or tiny kids dressed in bright bin bag creations taking a circuit of their school block.

For the truly brave (or foolhardy, depending on which way you look at it) the local obsession for fire and chaos reaches its peak during the infamous Correfoc or ‘fire run’ of the Festa Major, a frenetic night-time throwback to devilish infernos, firecrackers and mischievous mayhem.

The advice to cover your face and wear long-sleeved clothing barely hints at the unbounded carnage and peril of the event, where dragons breathe fire, kids throw bangers and everyone appears to lose their minds in a battle for survival.

Of course, for the more sedate and aesthetically inclined, Gràcia is happy to embrace the city’s wider appreciation of Gaudí, and the stamp of the great man is easy to find. Park Güell is top of the tourist list and is the perfect place to experience the iconic architect’s genius and look out over the Gràcia and the city all the way to the sea.

The walk up to the park also emphasises the topography of Barcelona and Gràcia’s position at the point where a gentle slope kicks up into a proper hillside, where if you’re lucky you’ll find an escalator to ease your ascent to the chocolate-box park entrance.

More on the level, and just a street away from the central Fontana metro stop, the recently re-vamped Casa Viçens is a hidden jewel in the narrow streets, its glowing mosaic tiles and ironwork as surprising and magnetic as a gingerbread cottage in a forest. This historic gem includes images of the house that hint back to the days when, like the rest of Gràcia, it was free to breathe, surrounded by rural spaces and gardens since lost to inevitable development.

Progress is the enemy of any ‘secret’ city neighbourhood, and Gràcia is no longer immune to the pressures of discovery nor the possibilities for commercialization that arise from untramelled popularity.

For one, you now have to pay to see the heart of Park Güell, but the changes go deeper too. Gentrification is a controversial inevitability of high demand and luxury developments are starting to take over from the gritty, graffiti-daubed squats which were once familiar monuments to the area’s Bohemian core.

Gràcia has also become an understandable Mecca for young tourists and exchange students, and you’ll hear many languages spoken in the streets. Still, it will take more than popularity to dull the fundamental happy and welcoming vibe that can be enjoyed by those who embrace Gràcia for what it is and don’t try to imprint unwanted globalization.

It could be argued that a hint of international sophistication is no bad thing, and those who prefer to pay high prices for complex coffees that take an age to ‘barista’ will find plenty of achingly cool cafes ready to take their money. The important thing is that you’re also never more that a few paces from a quick, cheap and very tasty cortado, served by local characters for little more than a Euro.

And that choice is really the heart of today’s Gràcia. Here, you can be who you want to be, whether you prefer a calm, quiet, anonymous wander or are looking to put on an innovative music and theatre show in front of crowds of revellers. One day you can run from flaming dragons, the next you can promenade along Carrer Verdi and take in a movie in a proper cinema in original version before retiring for dinner on a terrace while watching the world go by.

Local residents would certainly tell you that Barcelona needs Gràcia more than Gràcia needs Barcelona, but really they both need each other. Certainly from a visitor’s point of view, both combine to give Barcelona its unique appeal, not just as a theme park for Gaudi fans, but as a proud living, breathing, working city with unique appeal and rewards for all ages – especially those willing to dig a bit deeper.

According to Idealista, sales prices in the district of Gràcia showed an annual increase of 3.3% at the end of March 2019, ending the first quarter of 2019 on €4,409 per square metre. This is a higher increase than was seen in Barcelona city as a whole, where average prices increased by 1.5%.

BCN Advisors are delighted to present the following properties currently for sale in the Gràcia district:

Protected: Penthouse to be refurbished with a fabulous 123 sqm terrace in Eixample