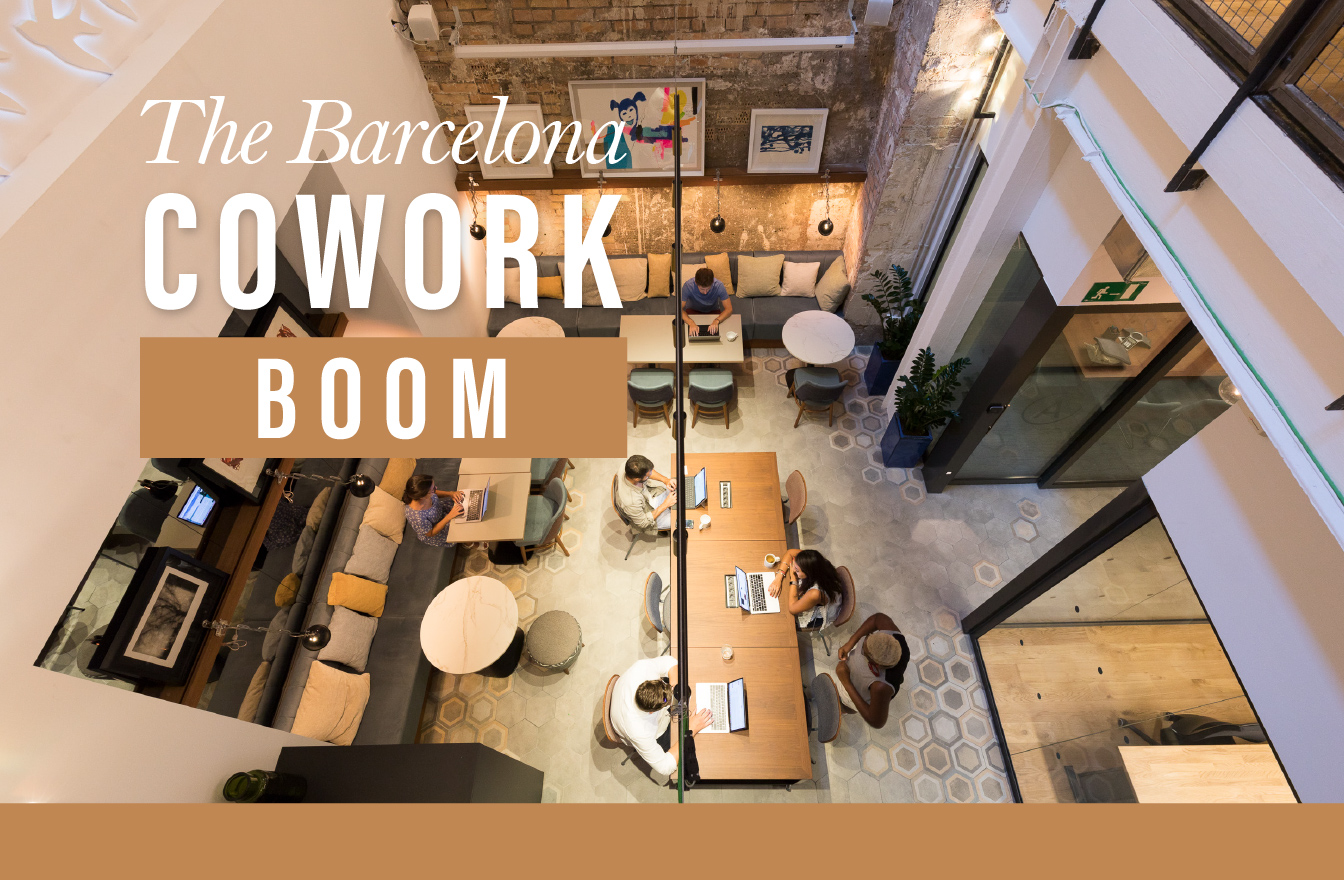 For many people across Europe, heading to the ‘office’ no longer means sitting at the same desk and next to the same people every day.

Increasing numbers of professionals are opting for flexible spaces – whether it be hot-desking areas in buildings they already work in or taking space in independently owned coworking set-ups – it’s fast becoming part of modern working life.

Nowhere is this trend more apparent than in Barcelona, recently given the accolade as the third best place to work in the world for digital nomads by Forbes Magazine. Coworking spaces in the Catalan capital are increasing at an exponential rate, catering for all tastes and professions, from small locales with communal tables to large complexes with private offices. You can find women-only spaces and others that are industry-specific, as well as spaces offering the bare minimum to luxury and all-inclusive models. In 2018 alone research by James Lang LaSalle (JLL) showed that coworking spaces in Barcelona increased by 35%.

So why this rapid growth?

Without doubt, the way people are working is changing, with increasing numbers of the population working in the ‘on-demand’ or gig economy. Cloud computing, super-fast WiFi and 4G (soon 5G) connectivity means that work can be carried out anywhere at anytime in the world. The traditional 9-5 day is also fast disappearing with more focus on community and collaborative projects. Many companies are beginning to realise that, to compete in the digital age, they need to attract and retain skilled people who are unlikely to enjoy traditional office environments. In addition, the prospect of low wages and an insecure job market means that increasing numbers of young people are seeing the advantages of entrepreneurship and ‘going it alone’.

“There has been a fundamental change in the human mindset over the past few decades as the workforce moves towards valuing experience and usage more than ownership (money),” explains Ben Nachoom of OneCoWork (https://onecowork.com/).

“We see this across nearly every industry. The preferences of working age adults are not the same as they were 30, 20 or even 10 years ago. A large part of this is the shift away from the preference of owning assets, towards being able to use them, with an exception perhaps being the housing market. Employees no longer place so much value on the corner office, or the Porsche that might come after a 20-year career. Much more value is being placed on the journey, the experience that a company can provide them. With huge competition for top talent, companies are forced to up their game when it comes to providing a great experience to their workforce. While many younger companies and startups that are going through hypergrowth have had this mentality from day one, the same can’t be said for many larger organisations. Placing teams in coworking spaces, with all the social and environmental benefits that it brings, helps companies to compete for this talent.”

OneCoWork in Barcelona has been a huge success story. They now currently have three large spaces with more than 1,100 workers. Their most recent cowork in the Barrio Gótico filled 50% of its occupancy in just one month.

Barcelona also has a thriving start-up and tech scene, which evidently attracts digital nomads. Some of the world’s biggest companies such as Google, Facebook and Amazon now have a presence is the city, with many more expected to follow.

Antonio Hurtado, owner of Transforma (https://www.transformabcn.com/), a coworking space based in Eixample, believes Barcelona is the perfect location for a “European Silicon Valley”.

“It is a city with a lot of business opportunities. There are many major events about technology and innovation. It is also the perfect location for freelancers due to its multicultural community, good weather and great location.”

There are numerous advantages of working in a shared space from social aspects and flexibility to cost savings and interactivity.

After graduating from her Master’s Degree from ESADE, Anna Martínez Balañá founded Sheltair (https://sheltair.io/en) after realising that students often needed a space to work together. To make it as simple as possible, Sheltair devised an App via which you can book and pay in a few clicks and pay by the hour.

“Space has always been very important for me,” Balañá says. “The space where we are, where we create, where we talk with other people usually makes a significant impact on the results we are trying to achieve. The reason why I founded Sheltair was to democratise the private office and make interesting spaces available to whoever needs them in a flexible on-demand way.”

One thing coworking spaces tend to have in common is location. According to JLL, around 60% of flexible office space is located in the city centre and key business districts.

Just a handful of brands (such as WeWork and Impact Hub) that are established in any European market operate in more than ten locations, but this is a trend which is expected to change as tomorrow’s workforce will expect greater flexibility and environments that inspire and stimulate to succeed in a fast-paced, global marketplace.

“Quite simply, coworking provides companies of all sizes a plug and play model,” adds Ben Nachoom. “Companies can locate teams in any location relatively quickly without having to worry so much about the comfort of their employees, the legal aspects involved with setting up offices in foreign companies etc. As coworking companies become more global, it will only get easier for companies to set up teams in new companies as they won’t even have to change provider based on their company, further stimulating the growth of coworking. I see the coworking industry moving more towards the hotel industry. Different companies will have different preferences on design and different preferences on services, and each provider will have their niche. The way the industry is growing now, I strongly believe there’s room for growth for everyone.”